Getting Started with Chat & Chatbots

Twitch offers an Internet Relay Chat (IRC) interface for chat functionality. Chatbots allow you to interact programmatically with a Twitch chat feed using IRC standards; the bot connects to the Twitch IRC network as a client to perform these actions. This guide presents an easy bot example to get you started, along with next steps for using chatbots and IRC.

We’ll build a simple chatbot that responds in chat when someone types !dice. (This is known as a chatbot command.) When triggered, it randomly generates a number between 1-6. We run the fully-functioning chatbot on Glitch,  and then show how you can alternatively run it locally on your computer. Here’s what the end result looks like: 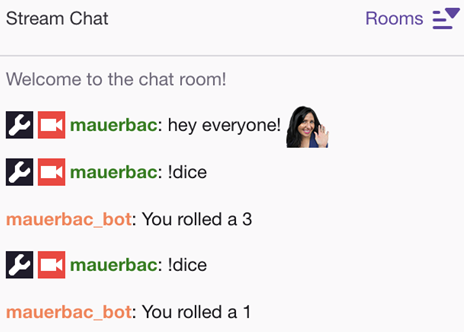 Run the Chatbot on Glitch

Glitch lets you instantly create, edit, and host an app in the cloud. The code for this tutorial is live and can be accessed here. Simply put your credentials (the environment variables above) in the .env file and click Run.

Now that the bot is running and connected to the Twitch IRC network, we can interact with it. On twitch.tv/<CHANNEL_NAME>, type !dice. You’ll see a number from 1 to 6.

If you prefer to build and run our bot example locally, follow these steps: